YTL Communications, a Malaysian telecommunication company, recently launched its WiMAX service. Like P1 before it, both companies bill their WiMAX networks as running on 4G (4th Generation) technology. Presumably they will be faster than the 3G networks provided by rivals such as Celcom, DiGi, Maxis etc.

But, should you care?

If you are an old school who still surf the Web with PC, you may be interested in WiMAX. But if you are a fan of Apple iPhone or iPad, you can be excused for being less than thrilled. These gadgets won’t run on WiMAX. While there are some Android devices which run on this platform, their number is small.

Future may not be good for WiMAX either. Some of the world’s largest carriers, such as AT&T and Verizon of US, and T-mobile and Vodafone of Europe, have already thrown their weight behind LTE (Long Term Evolution), a competing 4G technology. Before long, the market will be flooded with smart phones for the new platform.

This is not to say that the future for WiMAX is bleak. It is just that it probably won't be a star. WiMAX is backed by chip giant Intel. The fact that WiMAX is at disadvantage signifies the shift of power from Intel and Microsoft to Apple.

1990s was the era of PC; the last decade was the era of the Web. Today we are entering post-Web era – an age whereby the phones are more exciting than the Web itself.

Workplace Internet - Ban or No Ban?

[Note: This post was originally published in my other blog. I re-publish it here with minor modification.]

Banning of Internet access at workplace is hardly new. Employees abusing company resources is a known fact. But is banning Internet access, or blocking of certain sites, a solution?

For a start, YouTube may not be as unproductive as some may think. Many product demonstrations are now on the popular video sharing site. Facebook, with the ubiquitous ‘Like’ button, is a great marketing tool. (Imagine that if you ‘like’ a product, all your 1,288 friends will be notified.) These sites, when put to good use, can be extremely beneficial to all businesses. And I don’t think it is wise for the management to tell us:

OK, now we have advertised on Facebook. We will lift the ban for one hour. All of you please go to ‘like’ our products.

The fact that my employer is in IT industry further complicates the matter. Just the other day, a co-worker of mine was doing a ‘stress test’ through the means of YouTube video-download and P2P movie-download.

Internet ban at workplace also has unwanted impacts in human resource development. Why, do you think, is Google so creative? This is because the Internet search giant gives plenty of freedom to its staff.

So, should employers block access to those seemingly unproductive web sites? There are no hard-and-fast rules, but this is my suggestion to the management:

If you want your staff to be efficient, do consider a ban.

If you want your staff to be creative, then do not ban. 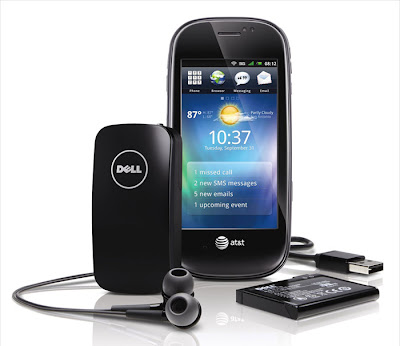 Well, not yet. But this may be possible in future.

PC maker Dell has ventured into smart phone business, with the launch of Aero recently. Unfortunately, Aero has been given thumb down by many analysts. One main gripe: the phone runs on Android OS 1.5, a pretty outdated version. (The latest version is 2.2.)

Dell’s strengths in PC business, as we know, are its distribution channel (ordering over the Web or phone, and direct delivery), as well as the ability to customize the machines. Which makes me wonder: Can we ever customize our mobile phones?

Imagine that we state our preferences when we order our mobile phones: Want a faster processor? Check! Want more memory? Check! Want you phone to be in pink color? Check! Isn’t that wonderful?

Admittedly, customization of mobile phones won’t be so easy. Customization of PC works because Dell delivers them to our doorstep. When it comes to smart phones, most of us buy subsidized units from the carriers. When there is another party involved, things become more complicated.

Still, I hope Dell or other smart phone makers will explore this possibility…

Posted by khengsiong at 10:57 PM No comments:

Email ThisBlogThis!Share to TwitterShare to FacebookShare to Pinterest
Labels: phone

According to a BBC news article dated July 22, 2010, several social networks gained popularity during the period from June 2009 to June 2010. They are: Facebook, Twitter, Orkut and Linkedin. On the other hand, MySpace, Flickr, Bebo and Friends Reunited had seen their “unique audience” dropped.

I have been posting photos to Flickr since 2006, and opted for a paid account last year. While I like the minimalist design of Flickr, I wasn’t a little bit surprised by the BBC news. After all, the function of Flickr has been largely replaced Facebook. On Flickr, a free account allows us to display just 200 pictures. A paid account removes that limit, but costs us US$24.90 every year. On the other hand, we can post as many photos as possible to Facebook at no charge. Yes, Facebook compresses the pictures we upload, thereby reducing image quality. But for the average Facebook members who only want to share their casual snapshots among their small circles of friends, the choice is a no brainer.

But Yahoo, which owns Flickr, is also to be blamed for the site’s decline. Flickr does not allow non-members to comment on the site. In a sense, it is a closed network. Apparently, non-members will be less inclined to come to Flickr, if they can’t participate.

I am not optimistic with the future of Flickr.

The ups and downs of social networks

Posted by khengsiong at 8:50 PM No comments:

Green Packet and the Future of WiMAX

In Malaysia, there are primarily three ways of accessing the Internet wirelessly – Wifi, WiMAX and 3G. Wifi has limited range, and is usually provided for free in hotels and F&B outlets such as Starbucks, McDonald’s and Old Town White Coffee. WiMAX and 3G, which both have longer range, compete with each other.

If you have been following my other blog for a while, you probably remember that I met with the CEO of Green Packet in May 2009. Back then, I thought WiMAX had advantage over 3G. It was supposedly faster than 3G; it was unofficially referred to as 4G technology… I almost wanted to buy the stocks of Green Packet.

Now, I am not so sure if WiMAX still has the advantage. Technical-wise, it may be superior compared to 3G. But can your iPhone ride on it?